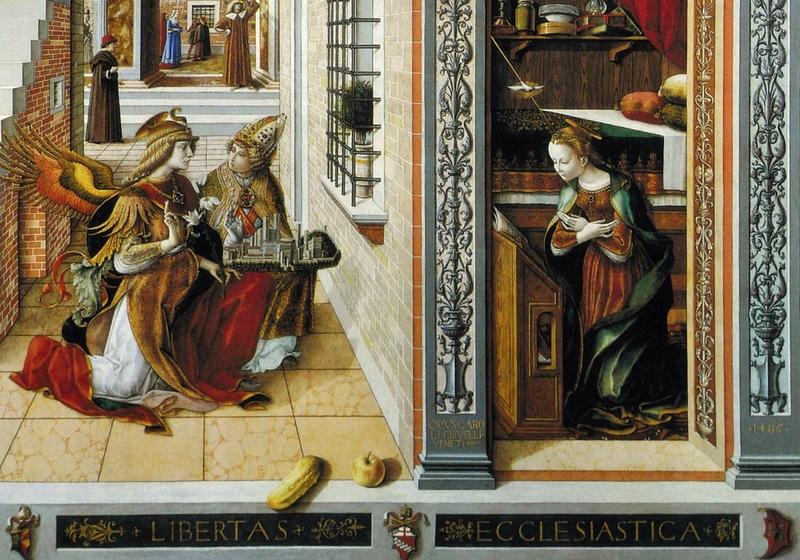 An Unusual Announcement: Carlo Crivelli's 'An Annunciation with St Emidius' (1484)

The multitude of Annunciations existing today epitomise Gregory the Great's words "Illiterate men can contemplate in the lines of a picture what they cannot learn by means of the written word".

Typical Tuscan Annunciations from the fourteenth- and fifteenth-centuries depict Gabriel entering the picture space from the left-side, and announcing the miracle birth to Mary, who is often kneeling or sitting on the right-side: the pictures usually contain only two significant ‘actors’.  Another style of Annunciations developed in the Marche region, and this had a large effect on Crivelli's Annunciation.

You are immediately struck by the portrait format of Crivelli’s work: the viewer stands at ground level on the edge of the picture plane, a quarter of the distance from the left-hand side - this looks like no ordinary Annunciation!  Another unusual feature of the work is that it tells a complex story within a story, which will be described in the presentation.

**Please note: this lecture will be preceded by the AGM, which will start at 6.30pm**

Desmond Winterbone graduated in Mechanical Engineering from Rugby College of Engineering Technology (1965) while undertaking a Student Apprenticeship.  In 1970 he graduated with a PhD from the University of Bath.  He took then up a lectureship at UMIST, where over the next thirty years he developed his early interest in engines and their performance.

He was appointed to a Chair in Mechanical Engineering in 1981, and served as a Vice-Principal of UMIST from 1986-88 and Pro-Vice Chancellor from 1995-98, with a period as Deputy Vice Chancellor from 1997-8.  He was elected a Fellow of the Royal Academy Engineering in 1989, and was awarded an Honorary DSc from the University of Ghent (Belgium) in 1991.  In 1989 he was awarded a Monbusho (Japanese Ministry of Education) Visiting Professorship at the University of Tokyo where he spent a three-month period.  He has been active in promoting links throughout the world, including particularly Japan and China.  He has written, or edited six books.  On retirement in 2002 he embarked on a degree in Humanities, with history of art, at the Open University. 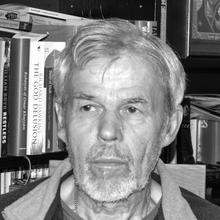 UPDATE 20/09/19: As final supper numbers have now been confirmed with the venue, 'lecture and supper' tickets are no longer available.

UPDATE 24/09/2019: Tickets are not available online anymore but there are still tickets available for this event so you are most welcome to attend the lecture. On arrival, please head to the Manchester Lit & Phil registration desk.