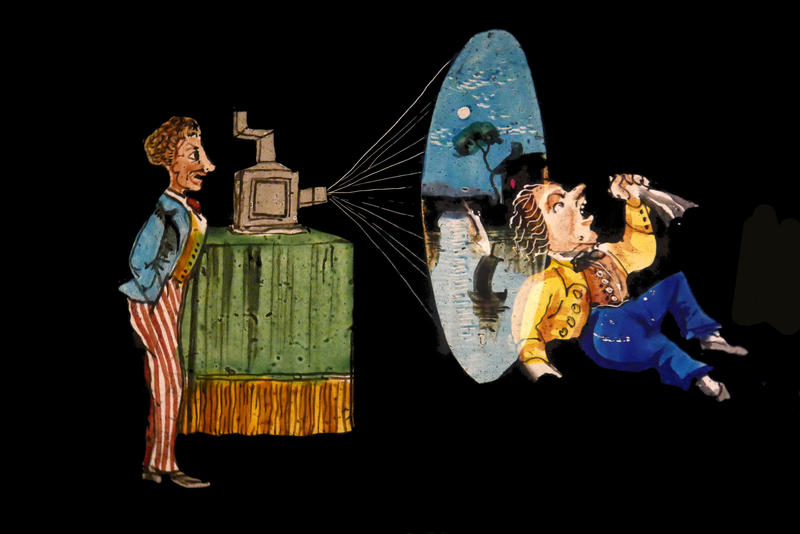 A brief introduction will explore the origins of the magic lantern as a popular form of entertainment, from the simple ‘lanthorn’ purchased by Samuel Pepys in the 1660s to its heyday at the Royal Polytechnic Institution in mid-Victorian London, and trace its continued use in cinemas, education and popular theatre until modern times.  This is followed by a unique magic lantern entertainment using original glass slides and equipment from the 18th, 19th and early 20th centuries alongside bespoke modern slides specially created by the performers. Experience the visual beauty, humour and often bizarre imagination which have sustained the magic lantern for almost 400 years and which still retain the power to surprise and delight audiences today.

The show features an authentic triunial (or Triple) magic lantern combining three projectors in a single device. This is the most complex and rarest form of magic lantern entertainment and Carolyn and Jeremy Brooker have been performing together for over 20 years to perfect this demanding art. It allows them to present their fast-moving shows, featuring the most spectacular effects the lantern can produce.

Jeremy Brooker has been giving magic lantern shows since he was fourteen years old and is widely considered one of the leading performers working today. Whether in the grand auditorium of the Centro Cultural de Belém in Lisbon, a circus tent overlooking Lake Geneva or the cabin of an historic Thames barge putting to sea with just 20 people onboard, audiences have marvelled at his mastery of this demanding art form. In addition to appearances at international cinemateques in London (the National Film Theatre), Switzerland (Musée de l’Elysée), and Lisbon (Cinemateca Portuguesa), he has performed at theatres, festivals, art galleries, and at a wide range of academic conferences including the Royal Institution, British Academy, Chemical Heritage Foundation in Philadelphia, and universities throughout the UK.

Mains (one of the following choices)

Desserts (one of the following choices)

UPDATE 25/02/19 - please note, as supper numbers have now been confirmed with the venue we are no longer accepting bookings for supper.

We're really looking forward to hearing from @JohnMIF next week. 'What is the City?' lecture tickets here:… https://t.co/RO8J97uCqE
@manlitphil